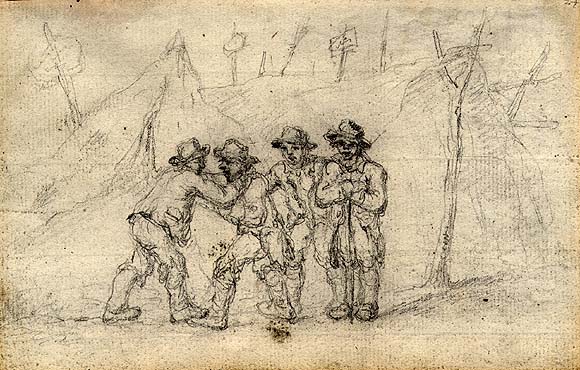 Collar and Elbow in general was known for its arsenal of rapid-fire leg attacks. “Footsparring”, as one journalist referred to it.1 “A fist fight with the feet”, proposed another.2 A style of “inside crooks, outside slaps, back heels, and other side swipes”.3 Accounts of bouts frequently describe how wrestlers would begin by testing each other’s balance and reactions with light combinations of toe-taps, much in the same way that boxers test each other with jabs and feints.

Here’s one such exchange from an 1879 championship bout between James E. Owens and John McMahon, both from the hotbed of American Collar and Elbow talent that was Vermont.

The wrestlers seized each other anew and repeated the delicate taps up and down each other’s legs with the tips of their shoes. Owens began to try little trips as though to test his adversary’s skill.

As the opening minutes of the bout passed, and the competitors started to get a feel for each other, the footsparring would often increase in tempo and intensity.

Their rubber-clad feet were pointed hither and tither like lightning to find a striking place. The slaps and counter-slaps of the rubbers on the men’s legs sounded like the explosions of torpedoes.

The ultimate goal, of course, was not to spar endlessly but to land the grappling equivalent of a “KO punch” that would send their opponent crashing to the mat for a fair back fall. Based on data I’ve gathered from historical accounts of Collar and Elbow bouts, these appear to have been the three most successful methods of attaining that fall.

1. The Foot Block (aka. the Ankle Trip, the Toe Block, or the Cross-Toe)

Here’s James E. Owens getting caught with that move against another notable champion of the day, Henry Moses Dufur.

In a breath both again stood upright, but scarcely had Owens regained his feet, and was evidently not expecting another attack, when Dufur’s right foot shot out, pinning Owens’ left foot down, and bringing the full force of his massive shoulders to bear. Owens was laid out with as handsome a ‘cross-toe’ as ever was seen.

The men resumed their original positions, when, quicker than lightning, Owens thrust his left foot out and caught McMahon on the right ankle, at the same time twitching the other’s shoulders to the left. McMahon feel flat on both shoulders and hips, while the spectators cheered. The time of the first fall was 20 minutes.

The Hip Lock (aka. the Buttock or the Fore-Hip)

Wrestler A pulls wrestler B forward, turns and loads B on his hip (usually the right hip), and continues rotating with his upper body to throw B to the ground. Wrestler A would often set up the hip lock by first feinting a trip in order to distract his opponent.

Dufur with a turn, a stoop, and a lift combined in a movement as quick as a flash, had McLaughlin on his hip and then on the floor for a fall in much less time than it takes to read about it. ‘First fall for Mr. Dufur! Time, seven minutes.’, shouted referee Gillman.

For one hour and a half they continued the struggle, giving a splendid exhibition of footsparring, tripping and blocking. Then Larkin feinted with his right foot, and, quick as a flash, threw in his left, and getting Carey on his hip, threw him with great force, winning the fall and the match.

Artful trips and blocks brought down many a man, but against opponents who could nimbly twist in mid-air to keep their feet (Henry Moses Dufur being the classic example), it often took something sudden and forceful like a hip lock to decisively slam them to the mat for the fall.

3. The Grapevine (aka. the Crook, the Hank, or the Inside Lock)

Wrestler A turns slightly sidewards and weaves his leg (usually the right) snake-like around wrestler B’s leg (usually the left). With his leg locked tightly in place, A would then attempt to wrench B off balance either forwards or backwards. The grapevine acquired a reputation for injuring or outright breaking legs, but it nonetheless remained by far one of the most commonly used techniques in bouts, for a simple reason – it worked.

According to Collar and Elbow rules, each contestant took hold of his opponent’s collar with his right hand, the left hand clutching the elbow. Tripping with the feet was the chief method of attack and the inside grapevine was the deadliest hold known.

The fourth fall was in the Collar and Elbow style, in which Hudson was laid clean on to his back with a clever hank.

After a desperate struggle, Cox fastened a grapevine on Dufur and threw him on his head.

For an overview of the other techniques that were used in Collar and Elbow, see here.