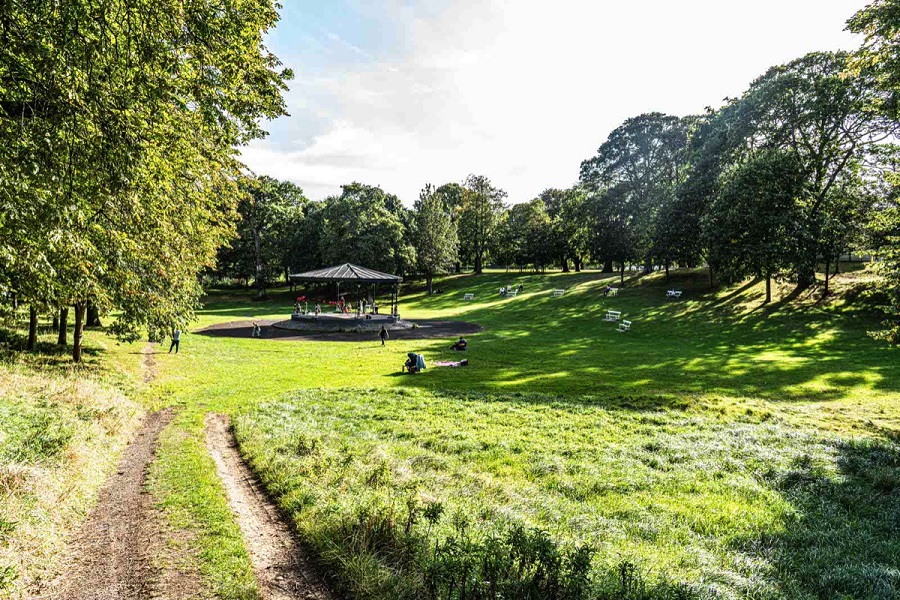 Originally published in “Carlow Past and Present: A Brochure Containing Short Historical Notes and Miscellaneous Gleanings of the Town and County of Carlow” by Michael Brophy (1888)

It was in that by-gone time when all sorts of manly exercises and pastimes enjoyed their most ﬂourishing palmy days; when Lord Byron donned the gloves as well as the Prince Regent; when poets and litterateurs did not deem it vulgar to have a bout at Tom Cribbs’, that Dwyer the wrestler was in his youthful prime. In those days collar-and-elbow wrestling arrived at a pitch that was never known before nor since. Wrestling was all the vogue throughout Ireland; but the Phoenix Park was its headquarters. The Marquis of —— was a great lover of this manly sport – far more manly than the so-called “manly art of self-defence” – and he organised national matches on a large scale, open to competitors from all counties, and giving valuable prizes to winners. On one occasion his lordship announced a great match in which the championship of Ireland would be decided and a silver cup awarded to the victor.

This great match in prospective was bruited throughout Ireland fairly well considering the times, and wrestlers from all counties put in an appearance to compete, and, if possible, each to return with the bays and take the position of a demigod among the peasantry of his native district. The Marquis himself was sanguine of the success of his own champion, a County Dublin man, and had him backed to win a large stake. This wrestler was not only of herculean build, but also of enormous strength and dexterity, and much money was staked on him, his success being a foregone conclusion.

The day arrived and the match commenced, and true to the forecast the redoubtable champion of the Marquis threw man after man until the long list of competitors for wrestling fame was exhausted. There stood the champion in the ring with arms folded on his broad and burly chest, waiting for each challenger only to quickly dispose of him by laying him quietly with his mother earth. At length he had given the coup de grace to the last man on the list, and the Marquis called out if there was any other challenger who would contest for the championship? There was a pause while the Marquis held up the cup for a long time as if in invitation to ambitious aspirants after fame. It was also evident that his lordship wanted more sport, and felt a triumph in witnessing the masterly manner that his wrestler disposed of all comers.

At length a gentleman on horseback at the outskirts of the ring said, as the Marquis was about closing the match :—

“Hold, Marquis; stay yet; there’s one more who will try a fall with your man.”

An open was made in the ring, and there strode carelessly in a tall, lathy, wiry-looking, squarely-built young man.

It was Dwyer the wrestler, and the gentleman on horseback was his landlord. There was a laugh at the marked contrast in physique this last challenger presented to his burly opponent, standing grim and triumphant in the ring and grinning a grin of terrible import at the new challenger. But, alas, for human vanity; he grinned with the wrong side of his mouth ‘ere he had done with the new-comer.

“I’d wish to back my man, Marquis,” said Dwyer’s landlord to his lordship.

“I shall accommodate you, sir, responded the Marquis, and a large stake was credited to Captain W on the success of Dwyer.

“Come along, young man!” exclaimed the champion to Dwyer, who was taking it very easy, having on, still, his cotamore,“let’s have done with it.”

“Maybe soon enough, mee hearty,” said Dwyer in an undertone, as he observed his landlord completing his bets, and then whipping off his cotamore and other superﬂuous clothing, Dwyer confronted his burly antagonist. Dwyer seemed guarded and cautious at ﬁrst as if to measure himself with the champion, who, on his part, seemed to be only playing with Dwyer ‘ere he would give him the fate of all who went their earthy way before. Having sufﬁciently felt his antagonist’s calibre, Dwyer, like lightning, “made a demonstration in force,” – to use a military phrase – and the champion was whipped off his legs, and before he could realise what had happened him, lay with his mother earth, the ﬁrst fall he received during the progress of the match.

There was a great shout, and alarm pervaded the champion’s backers, and the Marquis looked less triumphant.

“I was taken unawares,” said the champion rising, “I was off my guard.”

“Well, be on your guard now,” remarked Dwyer, as they commenced again, the champion more cautious, manifestly feeling he had caught a tartar in the last challenger. Putting forth all his strength and tripping tactics the champion made a determined effort to throw his opponent, but it only gave Dwyer an open to give his formidable adversary a heavier fall than the first. There was another great shout, and the Marquis seemed disposed to close the match, but his wrestler refused to desist, as disgrace awaited him if he was defeated. Again they wrestled, Dwyer each time throwing his man easily, who, seeing himself defeated, lost his temper and kicked Dwyer in the shins viciously.

“Kickin’ is not wrestling,” Dwyer remonstrated, “Don’t kick. I never do it; but I’ll tell ye what I’ll do; I’ll brake[sic] any man’s leg that’ll kick me.”

“Oh, it’ll only rise your dandher, man,” said the now defeated champion as he gave Dwyer a severe kick in the shin.

“Ye may talk of risin’ dandher in others; but, id’s not dandher but the divil ye‘ll rise in me, and there he is as you’ve ruz ’im,” said Dwyer, as he suddenly put on what was called his “break-leg crook,” when snap ! there was heard a sound like a pistol shot, and the champion lay unable to rise.

There were scowling looks given at Dwyer, and mutterings of sinister import, and curses “not loud but deep” from foiled backers of the favourite —“ We’ll make a corpse of him;” “never lave[sic] the park alive;” “knock the legs from under ’im,” etc., etc.

Captain W, now seeing danger to Dwyer ahead, hurried him out of the ring, and forcing him up on the horse said—

“Ride for your life, Dwyer; take the Knockmaroon gate and wait for me in Lucan.”

The foiled backers of the champion having now ascertained the nature of the disaster that fell on him, a rush was made for Dwyer just to catch sight of him as he galloped off, when they gave chase, but gave it up seeing its futility, and Dwyer escaped unscathed, got safely to Lucan, where he was joined shortly afterwards by his landlord, and, so ended this episode in his life.

The wrestler is not many years dead. His great physical frame was in keeping with his tenacity of life, for he lived ten years beyond the allotted four-score, and he passed away in the house that sprung up in one night, “ beating hollow,” as he said himself, “the blessed turf.”

Reﬂecting on this man’s great physical frame, it must be remarked how in racial descent it often happens that a repetition of the great physical attributes of a remote ancestor will be manifested in some one of his descendants. The Irish genealogists tell us that the O‘Dwyers (Hibernice, O’Dhubdhaire) deduce their descent from Cormac Cas, second son of Oliol Ollum, King of Munster, by his wife Sabh or Sabina, daughter of Con of the Hundred Battles. This Cormac Cas is set down by Irish historians as “remarkable for strength of body, dexterity, and courage.”