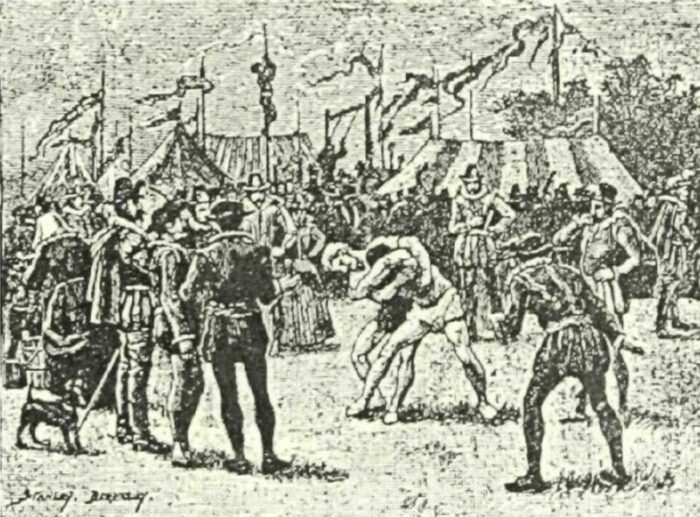 This an extract from Patrick Archer’s “The Humours of Shanwalla” (1913), a collection of tall tales and far-fetched anecdotes centred around the titular rural hamlet. In this chapter, a circus featuring a world champion wrestler has come to town, and the townspeople hatch a plan to send their own local champion, Ned McCoy, in to the ring to challenge him. Unbeknownst to Ned himself…

Similar to The Gaels of Moondharrig, the wrestling style depicted here is not Collar and Elbow. Rather, it is a form of jacket wrestling known only as “Fingallian style” – described as being like a mix of Cornish and Catch-as-Catch-Can. There is no record of any style with that name ever having existed, so it is quite probably simply a figment of the author’s imagination.

This tall tale thus illustrates the extent to which wrestling was once embedded in Irish storytelling and society as a whole, and suggests that the refined legwork of Collar and Elbow was something that Irish wrestlers often brought with them to contests under other rulesets.
——

The ringmaster of the “Franco-American Unrivalled Mammoth Circus” looked around him with satisfaction. Never had he seen the  great tent so well filled. Almost every inch of space had been availed of, from the top row by the canvas down to the edge of the ring. The Shanwalla boys were there in great force, tier above tier, waiting in anxious expectancy for the wrestling bout which was set down on the programme as item Number Seven.

Joe M’Grath had industriously circulated the report throughout the barony that Ned M’Coy had engaged to try a bout with the world’s champion, and here, as a proof of the engagement, was Ned seated in the front row, and altogether oblivious of the fact that to the majority of those present he was the great attraction of the circus.

The audience puzzled the ringmaster and the performers. The most brilliant feat of equestrianism hardly elicited applause.  The jokes of the clowns passed unheeded, the trapeze turn evidently failed to excite admiration, and up to the conclusion of item Number Six everything seemed to fall flat.

With the introduction of the large, thick for item Number Seven a change was apparent. Necks were craned and eyes strained to catch a first glimpse of the great men who were soon to follow. And when eventually the wrestlers strode into the ring, what a rousing cheer they received.

Then the ringmaster understood. These people had come to see what wrestling was like. Well, they would have value for their money.

Capriano and Pepini, smiling, muscular, and bedecked with medals, came forward gracefully to the centre of the carpet, bowed like princes to the assemblage, and at once commenced giving an exhibition of their skill. And such an exhibition as it was. Now Cornish style, then catch-as-catch-can, again Cumberland. Such strength, such activity, such feinting and posturing, such gripping and breaking away, the men of Shanwalla had never seen before, and instinctively their thoughts turned to Ned M’Coy, and they felt themselves wondering how he could have the hardihood to dare attempt a trial of strength and skill with either of these wonderful wrestlers.

Pepini was, of course, vanquished in each bout. That was part of the programme as previously arranged. The world’s champion had never been known to receive a fall. The turn finished amid deafening applause, and, while the champion rested, the ringmaster came forward, holding a ten-pound note in his hand, and announced in stentorian tones that Signor Capriano “was ready to meet all comers, according to advertisement.”

A dead silence fell upon the audience. No one stirred.

A thousand eyes sought the form of Ned M’Coy, and Ned, having had his attention directed to the fact bv Rose Mulhall, who was seated by his side, looked around, and, finding himself thus observed, blushed furiously. The champion, following the glances of the audience, smiled encouragingly in Ned’s direction. Ned, not understanding, blushed  still more furiously, while Rose, becoming nervous, edged away a bit from him.

Still a solemn silence. Not a whisper was heard. The Shanwalla boys scarcely breathed. Had Ned M’Coy become cowed? Would the challenge pass unheeded ? Not so. Joe M’Grath felt the time for action had come, and rising from his seat he jumped into the ring with the shout, ” Shanwalla takes up the challenge, an’ Ned M’Coy’ll rastle the wurruld’s champyin.”

A thunderous burst of applause greeted the bold announcement. Joe M’Grath’s stroke told, and Ned M’Coy, ere he could well realise what had. happened, found himself in the ring opposite the redoubtable Capriano.

“What style, please, zare?” asked the polite champion, as he bowed to Ned and smiled benignly.

“What was ze gentleman’s please to say?” asked Capriano, as he smiled and bowed again, looking at Joe M’Grath.

“Fingallian style,” reiterated a hundred Shanwalla throats with a forceful eloquence that brought the circus manager from some hidden recess where he had been counting the receipts, and caused the Royal African Man- Eating Tiger to cower trembling in his cage.

The manager, being a man of perspicacity, quickly took in the situation, and the announcement was immediately made that Capriano would wrestle Ned M’Coy in the Fingallian style. He was an agreeable chap this Capriano, and had no objection to become a champion in the Fingallian style in addition to the honours he had already obtained in the more generally known systems of wrestling. Capriano learned from Joe M’Grath that the Fingallian Style was simply a combination of Cornish and Catch-as-catch-can, the only difference being that no holds were allowed to be taken on the belt or below it.

The preliminaries were soon arranged, and five minutes later the wrestlers stood facing each other in the centre of the ring, Capriano wearing a Cornish wrestling jacket, while Ned, who had been divested of his ordinary coat and vest, stood arrayed in Brian Boylan’s frieze jacket, looking quite a strippling in the presence of his gigantic opponent. There was, however, a light in Ned’s eyes and a dilating of his nostrils which spoke of spirit and determination. Once fairly in the ring his usual shyness evaporated, and he stood before his formidable antagonist with the easy grace of a born athlete, his heart high-beating and every sinew and muscle braced for a struggle upon which he felt depended the reputation of the village which had (through the medium of Joe M’Grath) declared him its champion.

Joe’s heart almost failed him at the last moment, as the disparity between Ned and Capriano was fully borne in upon him. Larry Dempsey, noticing Joe’s look of discomfort, whispered to him, “It’s no match. Poor Ned’ll be kilt. God help him, the innocent crathur, to let himself be inveigled into such a place. But, mind ye, if he’s hurted you’d better look out for yourself.”

Before Joe could offer a remark the contest had commmenced, and both wrestlers, in crouching attitude, were playing for a hold. Suddenly Ned was gripped unfavourably by the sleeve, but with a rapid twist and plunge he was free, and in the fraction of a second was seen to have a favourable hold on his opponent’s coat collar. Capriano seemed to take things quietly, and stretching forth his hands with a smile of conscious superiority took the outside holds on Ned’s coat, and then commenced a wonderful exposition of the “collar-and-elbow” style of wrestling.

Capriano began the footplay, and marvellous indeed was the agility and address he displayed. Ned, on his part, seemed equal to the occasion, and slipping one of Capriano’s ornamental trips, caught him smartly on the heel, staggered the champion, and following up his advantage with lightning-like rapidity darted underneath his powerful antagonist to “cross-buttock” him. Capriano, however, aware of Ned’s intention, by the exercise of his great strength freed himself from M ‘Coy’s grip, and, jumping clear, gave the Shanwalla man a wrench so terrific that he went staggering to the further edge of the carpet, where, ere he had quite recovered, Capriano pounced upon him as the hawk pounces upon the sparrow, and gripping Ned around the body lifted him back over his bent knee as easily as if M’Coy had been a child.

This, however, was an old Fingallian trick, and Ned, being conversant with it, counter played by bringing his foot to bear lever-like on the inside of Capriano’s further leg, again fairly staggering the champion. Then it was that Ned M’Coy made his effort. His opportunity had come.

With all the strength of his muscular right arm he gripped his opponent around the neck, while swiftly and dexterously his right leg entwined itself around Capriano’s left. A chorus of voices, hoarse with excitement, came from the onlookers.

“Stick to him for your life!”

Capriano made prodigious exertions, shook himself like a captive lion, strained, twisted, pulled and pushed — all in vain. Ned M’Coy’s inside crook had never been known to fail, and it was evident that Capriano was unable to free himself. Like grim death Ned stuck to his crook, feeling he had the advantage, and using every ounce of his strength in the endeavour to lever the champion backwards to the floor — and defeat.

But Capriano was a man in a million. At Ned’s first application of the hitherto invincible “inside crook” the champion had been pulled backwards several inches out of the perpendicular, where for a moment or two he remained swaying, but gathering himself for an effort, as only a man of his physique and training could under such circumstances, he not only refused to yield further despite his opponent’s most strenuous efforts, but straining forward had actually regained his balance, when, like a flash, Ned unwound his leg from the “inside crook,” and suddenly pulling the champion forward — in the direction in which he was straining — M’Coy put all his power, energy, and dexterity into as glorious an “outside crook” as ever was seen on the plains of Fingall.

Heavens! What a roar shook the earth as, like a falling tower, Capriano came down upon the carpet underneath M’Coy.

As the rush of an avalanche was the rush of the Shanwalla boys over seats, benches, and barriers, right into the ring, where for several minutes they remained undisturbed, cheering the while almost loud enough to split the canvas of the tent.

When the uproar subsided the manager made a neat complimentary speech in handing the prize to Ned.

“You must make a speech, too,” whispered Joe M’Grath to the victor.

“I’d rather give back the money,” said Ned.

“Well, never mind,” said Joe as he jumped upon a table. “I’ll make one for you.”

“Ladies an’ gentlemen, an’ fellow counthrymen o’ Shanwalla, ay, an’ Skerries an’ other places as well,” said Joe in his best style, “I think we showed everywan here tonight that there is good men in Ireland yit. Capriano is a bully man, an’ a thremenjis good rastler. He may be the champion o’ th’ wurruld for all I know, but there’s wan thing I’m thunderin’ sure ov, he’s not the best man in Fingall.”

For Shanwalla the circus had ended. Hours afterwards, on the homeward road, manly voices could be heard from out the darkness proclaiming aloud the invincibility of Shanwalla, and announcing the willingness of that village to oppose the remainder of the universe in the wrestling arena whenever the representatives of that portion of creation should feel so inclined.