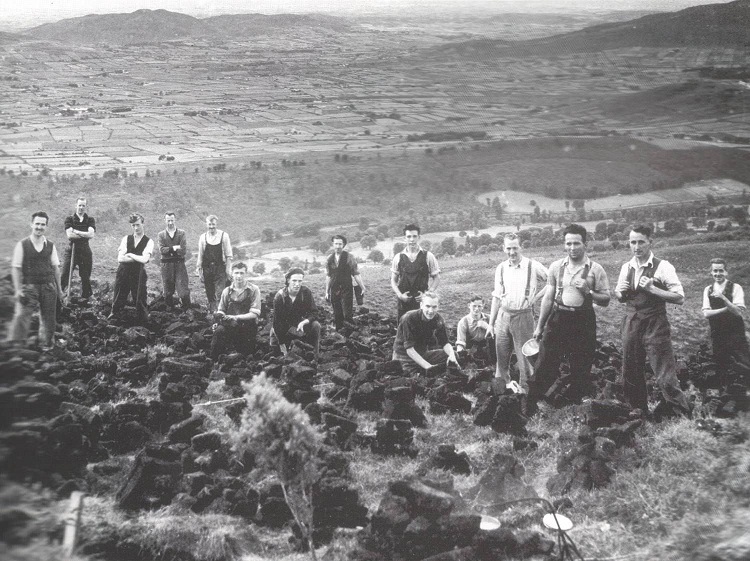 This is an extract from a short story originally published in “The Irishman at Home: Characteristic Sketches of the Irish Peasantry” (Dublin, 1849). It is set in the Bog of Allen, on the border of Kildare and Offaly. Two men, Tom Molloy and Kenny Kilfoy, are working as part of a group of turf cutters when they come to verbal blows over the affections of a local girl, Essy Buckley. As tempers rise, they agree to settle the dispute with a wrestling match at the end of the day.

Although the wrestling style in question is not specifically identified as Collar and Elbow, the description of the match strongly suggests that this was the framework under which the two men competed. Both wore sturdy frieze jackets, attacked primarily with combinations of trips, and victory was determined by the best of three falls.

“It’s easy settlin’ that,” said Tom, “I’ll wrastle you this evening, when the dacent girl you have a regard for, (mimicking Kenny’s drawling tone), and that cares little about you, I’m thinkin’, won’t be present, and let the best two out of three show who’s the man that has a right to brag.”

“Aye, that’s the fair way,” interposed some of the men, who saw a quarrel likely to ensue, and wished to prevent it, by what they considered a harmless trial of strength and dexterity.

The men resumed their work with increased good-humour and renovated glee, all except Kenny Kilfoy, who nursed his angry feelings and passions in silence within his own bosom. Their work was soon done, and many a dry or elevated patch in that quarter showed black, being thickly covered with the square sods cut from the deep hole which they left behind them. The sun was not set; it was yet early evening as they left the bog.

“Well, boys,” began Tom Molloy, “many hands makes the work light; we’re done brave and early, and it’s as purty a day’s work as you need look on.”

“We’ll have full time,” said one, “to thry the three falls here above in the meadow, and be home afther afore the supper time.”

“Auch,” said another, sure it’s only jokin’ Kenny was.”

“How’s that?” said another; “Sure not maining that it’s afraid he is you’d be.”

“I never joke ‘ithout laughin’, boys,” said Kilfoy, “an’ I’m not in the grinnin’ humour much at the present minute.”

As soon as they reached the meadow, Tom, who was jogging on before Kenny with another group, tossed off his coat, and addressing Kilfoy, who was crossing the stile —

“Now, Kenny,” said he, “let there never be a boast about the best man after this bout, an’ we needn’t be the worse friends afther. Come Pether, lend us your jacket, and throw my trusty here over your showldhers.”

He was soon arrayed in the frieze jacket, and kicking off his weighty brogues, he stood in his stocking vamps inside the little circle formed by his companions. He was joined by his rival, whose dark and lowering brow still plainly told of ire unquenched, and passion fierce and burning; and as they stood before each other, Tom stretched forth his hand in a frank and manly manner.

“Come, Kenny,” said he, “give us the fist before we begin, to shew there’s neither spite or anger in regard o’ the few words.”

“Let every madman and fool shake his own hand,” said Kilfoy, bitterly, withholding his hand, and looking on the extended one of his rival with a sneer.

“Well, the sorra may care for your good or bad humour,” replied Tom, moving towards his opponent, “come on, an’ let ev’ry man do his best.”

They grappled, and after a few preliminary movements, the contest became interesting to all parties.

Perhaps there is no exercise so animating and healthy as wrestling, as it is practised in most parts of Ireland, and at the same time so beneficial and conducive to health when conducted fairly. All the agility and strength of the frame are put into requisition; every muscle in the body is strung, and the steadiness of foot — the quickness of eye and limb, and the pliancy necessary to excel, give vigour and elasticity in a surprising degree.

Kilfoy was the strongest man, but he evidently did not possess the action or dexterity of Molloy, who exhibited at every turn that wavy motion of the body, so observable in the tiger and leopard kind, and which gives the plainest indication of nerve and agility combined, and which shows the body more like a moving mass of muscle than a composition of flesh and bone. Often did Kenny attempt to toss his opponent, and as often was he foiled by the superior tact and quickness of his adversary, and the spectators, by their looks, gestures, and exclamations, gave vent to their feelings or their admiration.

“By my conscience that was a mighty purty offer of Tom’s to dhraw him off.”

“Faix he was near getting the sleeshoge on him that time.”

“Look at the hump Kenny has on his shouldhers, watching like a badger in a barrel.”

“Faix Tom has as purty a stan’ as ever I saw with a boy; as straight an’ as light as Sharpfoot the dancin’ masther.”

“Bow! — he was near bringing Tom with that strong cross-thrip,” said one amateur, starting from a recumbent posture to one knee, as his favourite stumbled from a sudden forcible manoeuvre of his opponent.

“Ha! He’s at it agin — not so well as before though,” said another.

“Look at Tom how he smiles ; watch his eye; he’s throwin’ himself in the way ov that ugly curl agin,” said a young one.

“Never!” said another in a lower voice; “iv he thries that cross’thrip agin, he’s done as sure as his name’s Kenny Kilfoy.”

Kenny did try the cross trip again, and as quick as thought his rival drew back ; his foot missed the object, and, in endeavouring to recover his position, his foot was caught, and Kenny Kilfoy measured his length in the green grass. A loud hurroo declared the triumph of the victor. Kenny rose from the ground more furious than before. He was more enraged than ever, for shame added to his anger. He was certain of victory, and disappointment lent threefold stings to his former rankling. His friends came round him.

“I was thinking,” said one, “that cross-thrip ‘id disappoint you.”

“You should have got in on him,” said another.

“Close him, Kenny,” said a third, “when you go in again; he’s too active for you, and you’ll have a betther chance, for you’re the strongest.”

“Standhers-by are always good wrastlers,” said Kenny churlishly, shaking off his Job-like advisers, and walking forth again to meet his antagonist. They grappled again; Kenny went more incautiously to work than before. He tripped furiously, and swung his lighter antagonist about in rather an awkward way. Molloy went from side to side with him as he pulled, and escaped his efforts to throw him, until his own violent exertions pretty well fatigued him ; he then commenced annoying, and with a well managed feint he drew his comrade off his guard, and tossed up his heels in a most dexterous manner.

“You’re the best man be odds, Tom,” said Jack Buckly, “an’ Kenny must acknowledge that himself for a good thruth ; but he won’t refuse to shake hands I know now, as I won’t be easy ’till I see you friends agin.”

“Never!” muttered Kenny, with furious emphasis, from between his set teeth, and he turned from the group.

“When I offered him my hand,” said Tom, “before we began, I did it like a man; now I would not give him my hand for all he’s worth in the world.”

Kenny stalked away completely crestfallen, yet with a refreshed and a new burning hate in his bosom. He felt that Tom was beloved by Essy ; and he thought that harmless jest which Tom uttered in the bog was with a design to render him ridiculons before his mistress. He retorted in a way in which he imagined himself sure of drawing his rival into disgrace, and in this too he was foiled. Thus jealousy and shame were heaped upon him, and worked within his moody soul. Yet another trial awaited him, in which he suffered more, but which brought on the most tragic results.